DISCLAIMER: This blog was written by my partner in life: James. Some edits were made and my thoughts were included. Enjoy!

It was a great, exhausting day.  We arrived at 6:30 and had two and a half hours to find a place for our bags and get to the first venue.  The scene at the bus station was a cluster crap, with taxi lines and bus lines hours-long, so we quickly figured out a way to walk through Rio to get to the train and skip that first transportation step. Jane: The 30 minute walk through town reminded me of Cuba, forgotten old buildings in dire need of a new paint job.  We ate and made it as the first events were starting. 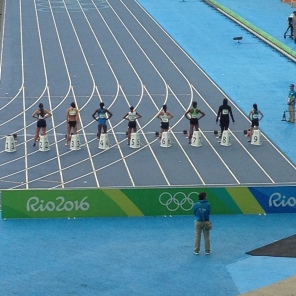 These are some of the fastest women in the world 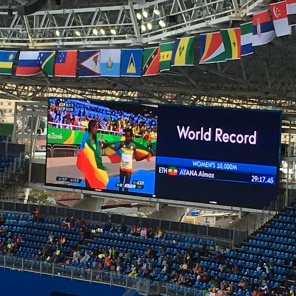 Saw Ethiopia win break a World Record and win the gold medal in th 10,000 meter race!
Track & Field was cool – we saw a world record in the 10K women’s final, set by an Ethiopian.  She was dominant.  Then, as the block was winding down, we saw an epic duel between a Brit and Belgian in the Long Jump (part of the Heptathlon) as the other athletes were being eliminated. The Brit set the Olympic record on one of her jumps.  The Belgian then tied the Olympic record on her last attempt of that round, and then set the World Record during the next round.  The Brit tied the World Record and that’s how it ended. Jane: I cheered and yelled! Where else is it that acceptable to cheer and yell for a country you have no personal ties to? Perhaps many but this was the first sports event that I ever attended.

So I understand that you get a better view by watching this at home but actually being here is a different experience. The energy and support that you feel from the crowed is an incredible.

The duel made the event run long, and we only had 90 minutes to get to the next venue for Women’s Volleyball.  But that was more than enough time, like the crowds weren’t too bad and the transportation system is legit in Rio.  The workers kept telling us the wrong thing, but we’ve been traveling for nearly two years so that kind of thing barely slows us down at this point.  We ate and arrived in plenty of time.  The U.S. was dominant over Italy, but the Italian fans were so obnoxious that it added some tension and excitement into the proceedings. Jane: I wanted to yell “Boo, you Italian” or “USA! USA” instead I yelled, “USA you’re the best, yeah! Woo!” and tried to be louder than those obnoxious Italian fans.

Once they went down two sets, the Italian fans started booing the Americans before every serve.  The Italians stole the third set and this just got the fans riled up more.  Leave it to Italians to spit on the Olympic spirit.  The Puerto Ricans were trounced by the Netherlands, but a few of them looked damn good getting beat.  And whoever was in charge of music played nothing but Puerto Rican (and Cuban for some reason) music during the match. Jane: The referee sounded like Jason Bateman in Dodgeball only unforgivably cheesier and he kept talking smack! He made mildly racist remarks. At one point, he called the Puerto Rican girls, “Cubans” and immediately corrected himself. Also, Pitbull is Cuban. At least he got it right when began to play music by J.Lo and Ricky Martin. I would’ve appreciated some Marc Anthony.

Saw 2 games: Italy vs USA and Puerto Rico vs The Netherlands

From the volleyball stadium, we walked through Rio and got dinner and drinks at the this awesome hole in the wall, watched Team Irving (USA basketball team) beat the Serbs, and then caught a bus out of town at 11pm.  We’re beat-ass tired, man, but it totally valió la pena. Jane: I did not look forward to our night bus to Vitoria. We paid for “Executive” bus seats which means that instead of a 90 degree incline, we’ll get a 140 degree incline and unnecessary air conditioning which would be frigging cold if you didn’t have a sarong. But as James said, it was totally worth it!

One of the coolest aspects of being in Rio during the Olympics was seeing how they’re putting on the event.  Oh man, the reports of disarray are so completely true and so completely false in exactly the way you’d expect.  Like Rio couldn’t feel any safer, despite the media’s hype of danger, which we expected after two years of hearing every city we’re going to visit next is Falluja 2004.  For fuck safe, they imported 85,000 soldiers for the games, how is it not going to be safer?  I’m interested in the final crime statistics for the games – I’d be shocked if they’re not superbly low.

But the reports about preparations being in shambles are so hilariously true. NOTHING is ready for the Olympics, which um, started a week ago. We were at two main Olympic venues, and there is simply no signage or landscaping or anything of that nature.  Just a bunch of ill-informed people (clearly not from Rio generally) with foam hands that say Rio 2016 on them.  Providing one service and one service only: misinformation.  But it was service with a smile.  We have some great photos that Juana will probably put on Facebook.  But like the volleyball venue is one of the principal Olympic venues.  There is one big sculpture of the 5 rings … actually, it’s more medium-sized … which looks good.  But then everything else looks like it’s under construction.  The trees circling the arenas in the area are dead.  DEAD.  Not on dying, dead.  And a cheap wire fence circles the arena, and that has shoddy Rio 2016 plastic shoddily wrapped around part of it.  So ghetto, man.  And right across from the main entrance of the volleyball arena, there is an abandoned building on the verge of collapse with graffiti that says, in English: “Olympics are only for the rich!”  There’s graffiti everywhere.
Oh, and perhaps funniest/worst: exiting the main transit station for the area, you have to descend this long staircase that basically is just scaffolding and is clearly supposed to be temporary.  It sways and seems dangerous.  And I’m pretty sure nobody has verified that it’s not.  The ground all around this area is covered with these dust-colored squares of sod that somebody dropped there, haphazardly, a month and a half ago, never attached to the ground or each other, and then never watered.
It’s so Third World, like in-your-face Third World, such a microcosm.  The flip side of that is that people are relaxed and everything works just enough and everybody has a good time.  We brought in backpacks stuffed with drinks and food, which we knew was prohibited, but c’mon.  It’s the Third World.  We went through security at the Track & Field stadium and the security dude stops us and asks us if we speak Spanish.  We say, yeah, and then he tells us food and drinks are not permitted.  Without even waiting for a response, he says, that’s okay, go ahead.  Like he wanted us to know he wasn’t incompetent at his job, he just didn’t give care about us bringing in food and drinks.
This really paid off at the volleyball venue, because even though the concessions were priced inexpensively (price-gouging at stadiums in the Third World is unheard of), the lines were so long for everything.  At the volleyball venue, the guards seemed to only see my thermos filled with water, so they made us chug that before we entered.  They missed all the other drinks and the food we brought, apparently, and they had free filtered water inside, anyway.  All in all, we had a GREAT time.  I’m delirious right now.
Jane –
As James said, “The Olympics in Rio is like a cosmopolitan of a third world country.” It is what it is and they can’t hide the that. Ordem e progresso? It’s irony. With 60% of the political officials facing corruption charges (source: John Oliver), Brazil is a third world country and there’s no hiding that.
Inefficiency served with a smile is a theme in Latin America and we saw that with the long lines and misinformation. If you’re a down to earth type of person then this will strike you as quirky and maybe even a little endearing. As a result, you will have a great time! If you’re a rich and snobby, you will have a bad time no matter what.
Other random observations:
– An “Info” guide outside the stadium told us that coffee is not sold inside the stadium. As soon as we entered the stadium, first thing on the menu of the food stands? Coffee.
– Coffee is sold hot and in four ounce foam cups with four packets of sugar.
– We saw three buses go over a curb that night. One bus held the women’s volleyball team.
– There are special trains for women who do not want to get harrassed. 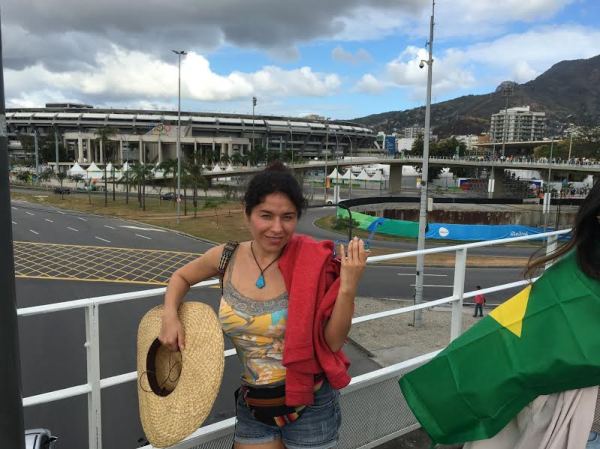 For women only, Monday through Friday. If you prefer not to get fondled or harrassed, enter here in the late afternoon.