I finally lost my post-baby weight and it only took less than 5 months! Here’s how I did it.

The biggest reservation I had about having a baby was the post-baby weight I’d be left with. I was scared of piano legs, having a double chin and inheriting a pudge that resembled a bag going through radiation inside a microwave. Once I realized how superficial that was, I created healthy habits that included strength training, some cardio (via salsa and bachata dancing), meditating, eating more greens and consuming less red meat. I did this a year before trying to conceive. In that same year, I also barraged my momma friends about how they gave birth. C-section? Via the vagina canal? Which results in less of a pudge?

Now I don’t remember getting a straight answer but they all look good today so that was inspiring. My sister-in-law, who had two girls has a small frame. She once rolled up her sleeves and I saw some guns. I had spent half the day with her and observed the countless times that she picked up her girl. She’s getting her reps in! So talking to the right people also put me in the right set of mind.

Once I got pregnant (or learned about it on the fifth week), I hit the gym three times a week. I tried to eat healthy but I also ate whatever the hell I wanted. And whenever someone said, “You’re eating for two people.” I noted that the other “person” is the size of a sesame seed. So, no, not really. But if you want to use that as an excuse to be gluttonous, that’s your prerogative. 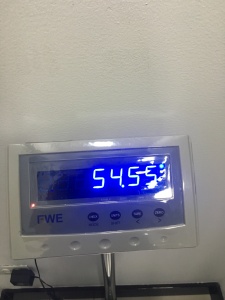 Once upon a time at a gym, this happened.

I actually exercised until I was 39 weeks pregnant. I swam a lot during my third trimester and I wish I had done more of that instead of cycling. I gained the recommended 35 – 45 pounds when I was pregnant. I worked hard to stay in shape, my arms did not increase in mass and my calves did not turn to cankles. That’s what fear did to me.

When D-day came, I pushed her out vaginally, without an epidural. It was the most painful day of my life. The OB actually made the executive decision to cut me and I was so glad that he did because as soon as he did, she flew out like a bullet. It was a shit show and the most taxing day of my life. But also, the happiest day of my life.

When Santana was born, nothing else mattered. I had stitches down there and it felt like I was pissing fire so exercising was the last thing on my mind. I had frozen my gym membership for two weeks, I didn’t return for two months. I was ravenous all the time and yet my appetite was gone. I thought, this in itself should get me back to my pre baby weight. And if it doesn’t, I DON’T CARE!!!

Once I got out of that funk, I used a Haakaa to pump six ounces of milk out and stored it. As some of you may know, breastfeeding burns calories. Or rather, your body burns calories whenever it produces milk so for that reason, I made my body produce six ounces more, per day, of that liquid gold. I did this for two months. For those who don’t like to pump, the Haakaa collects the let down of the other tit while you breastfeed. It’s a lazy and yet productive way to build a stash and burn more calories.

Next, when I finally started going to the gym, I did some cardio but I focused a good 20 minutes to building back the muscles around my thighs, calves, and ass. Por qué? Those are the biggest muscles we have on our bodies and when you have muscle, your muscle burns calories while you’re at home watching Netflix or doing nothing.

Then recently, I got a pedometer and learned that I’m clocking in less than 10,000 steps a day. I usually get in around 5,000 steps.

I thought I was better than that and I wish I could tell you that since then, I have been getting in 10,000 steps!

But if you want to accomplish anything, being conscious about what you need to do is the first step. So I choose my days to get past 10,000 steps and if I don’t reach that goal, then oh, well.

That brings me to the last thing that has made dropping the pounds so easy. And it’s one that NOT so many women have. It’s that “oh, well” attitude. I live a relatively stress-free life. Relative to what? Relative to the mom who has to work 9 to 5, pump during her lunch breaks and go home to a crying baby who misses her. To those moms out there, you’re amazing! I don’t know how you do it. But if it weren’t for you, I would not exist.

I have the luxury of taking time off whenever I want and working as much or as little as I want. I work from my laptop, my clients are awesome and they understood when I was pregnant. They knew that I would be back. While I never actually took any time off, I did decrease my hours to 1-2 hours a day. My husband picked up the slack and he continues to do that while we get used to taking care of our little tyrant who needs me more than him. Less stress = less cortisol = less abdominal fat.

James has been excellent at putting in the extra hours and doing all the chores around the house. Santana is a handful because she needs constant stimulation, attention and she doesn’t like to nap! (She’s better at it now but it took some time) My sister-in-law said that having a baby is her workout and I can agree with that now. Especially if you breastfeed.

To summarize, here’s how I lost the baby weight in less 5 months:

What about food? I haven’t been the healthiest person and as I type this, I’m wondering how it is that I lost that weight without watching what I eat. Whenever James hangs out with his buddies on a Thursday, I sneak in some chicken nuggets from Presto and watch shows like Modern Family, Girls, Fleabag, and a movie like, Late Night. But recently, being really present with what I’m eating has taken the joy out of eating junk food.

I had kale five times last week. I made a stirfry out of it and drenched it in soybean oil. I enjoy good fats like avocados, olive oil, and peanut butter. It satiates me and dissipates my snack attacks so there you go.

Now that I’m back to my prepregnancy weight, I feel that I need to step it up a notch and work towards a flat stomach. I can not remember the last time I had a flat stomach! Is it possible? What can I do to flatten it while I’m breastfeeding? What has worked for you?

Living and traveling in South America, also rambling about it. We’ll be in Colombia till November. Medellin, Barranquilla, Santa Marta, Cartagena and Cali!